This post is a part of our “Faith in Revolution” series, which explores the ways that religious ideologies and communities shaped the revolutionary era. Check out the entire series.

Historians have spent a lot of time discovering that the Age of Revolutions was also an age of camp meetings and swooningly intense prayer, of fellowship founded in hope of the next world, as well as in determination to change this one. We have spent a lot of time discovering this because we have spent a lot of time forgetting it. (Sometimes, the same historian discovered it, forgot it, and then discovered it again.) Historians agree—in theory—that both religion and revolutionary change matter to our understanding of the era. Yet the subjects are often separated in our histories of the age, fish caught from the same stream and placed in different nets. 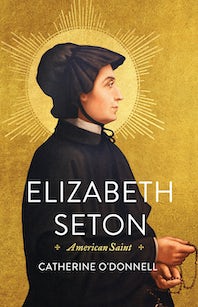 Researching my recent biography of Elizabeth Seton, a convert to Catholicism who in 1808 founded the United States’ first Catholic-vowed women’s religious community, has convinced me of the need to cut our disciplinary nets. That may seem counterintuitive. Seton was canonized by the Roman Catholic Church in 1974, becoming part of an ancient form of commemoration. She took vows of poverty, celibacy, and obedience as she knelt before clergy. And she crafted a life governed by the rhythms of the Catholic liturgy, a cycle whose revolutions do not progress but rather end where they begin.

Seton’s friends and family felt her conversion meant she was moving backward in time, from a shared, cosmopolitan Protestantism to a Roman Catholicism they found both alien and primitive. Why, her unhappy contemporaries wondered, would anyone exchange the intellectual and spiritual liberties of Protestantism for a life of hierarchy and obedience?

It’s easy to historicize their impatience: Seton’s friends and relatives participated in an Anglo-American mistrust of Catholicism, a disdainful association of the faith with benighted peasants, overbearing priests, and a pope by turns comical and menacing. It’s harder to see that the faint imprint of that imagined timeline—from past to present to future, from Catholic to Protestant to secular—lurks in our own historical thinking. One reason that historians often separate the study of faith from explorations of other aspects of the revolutionary age, is their association of religion with tradition.  Seton chose Catholicism. If she somehow figures in a history focused on political or cultural revolutions—and to my knowledge she does not—she would appear with her face turned toward the past, a domestic de Maistre in a modest black bonnet.

And yet, Seton’s choice of Catholicism reflected her curiosity about others’ faiths, her trust in her own judgment, and her conviction that she could make a life distinct from the expectations of her family. By choosing Catholicism, Seton was radically remaking her own life and creating a new possibility for the other women who quickly found their way to her community.

Coming of age in Manhattan, Seton eagerly sampled the offerings of her era: she was fascinated by the abstract deity in Rousseau’s Savoyard Vicar, admired Quakers’ plain dress, was thrilled to overhear Methodist hymns, and became deeply involved in an emotionally rich Episcopalianism newly on offer at the Trinity Church rebuilding itself after the Revolution. She first meaningfully encountered Catholicism in the Old World, on a trip to Italy, where she’d gone with her dying husband in a vain effort to save his life. But Seton agreed to attend Mass and visit Florence’s beautiful churches not because she was a traditionalist but because she was a cosmopolitan New Yorker who scoffed at the idea there was a single correct way to think or to live.

Her Italian hosts were eager for Seton—whose charisma they recognized—to convert and become a public face of their mistrusted religion. Seton at first deftly turned the idea aside, sure she would return home to the United States the Episcopalian she’d been when she left. Then, to her surprise, she found herself deeply moved by Catholicism’s sacraments and feast days, art, and gestures. After months of contemplation, which she continued back home in New York, she decided that Catholicism’s implicit anthropology took seriously people’s need for emotional and aesthetic sustenance—sustenance that she believed neither Episcopalianism nor the broader banquet of intellectual and spiritual choices she’d long enjoyed could provide.

During her months in Italy, Seton convinced herself that Tuscany’s people lived contentedly within a shared unity of belief, and that desire for social cohesion was for a time inseparable from her attraction to Catholicism. But even this feels modern, that is to say, a geographically displaced nostalgia that was Seton’s response to the endless possibilities of a revolutionary age. Moreover, after the first flush of her conversion, Seton stopped longing for a world that was uniformly Catholic. She neither lamented that Americans continued to sample faiths, nor fretted that their possibilities were multiplying in the early nineteenth century. She had chosen to submit her own judgment to the teachings of the Catholic Church as a scholar might build her work on the foundation of her colleagues, not to dwell in the past but to draw from it. On the contrary, she accepted that others would choose differently and had no desire for law or an ecclesiastical hierarchy to coerce cohesion. Nor did she imagine that religious diversity was merely temporary. In this, she embraced individual choice—and its messy social consequences—more fully than figures such as Ezra Stiles, who believed that churches with hierarchical structures would die out in the new republic.[1] More fully too than Thomas Jefferson, who wrote in 1822: “I rejoice that in this blessed country of free inquiry and belief, which has surrendered its conscience to neither kings nor priests, the genuine doctrine of one God is reviving and I trust that there is not a young man now living in the United States who will not die a Unitarian.”[2] By Jefferson’s lights, Seton had acted like a denizen of the Old World and surrendered her conscience to priests. Yet she was more at home in the new nation’s pluralism than the avowed revolutionary.

Seton’s work as an institution builder, like her spiritual life, emerged from her faith, drew on the possibilities of the revolutionary era, and created new possibilities for others. When she founded the American Sisters of Charity, Seton drew on principles of monastic life established by Benedict in the sixth century, and created a community modeled on one founded in ancien régime France, the Filles de la Charité. But there was nothing traditional about a Catholic motherhouse in the United States. Seton’s community relied on the religious protections established by the First Amendment, and it was radically subversive of the United States’ gender conventions. The Sisters formed a female household; women controlled finances, worked in publicly visible roles, and exercised considerable (though, given the structural and sacramental authority of male clergy, undeniably constrained) self-governance.  Other women in the United States did not live like this: the quiet community in rural Maryland attracted adventurers, non-conformists, women of faith, and rebels.

Back to our figurative fish. Thirty years after Seton’s death, Herman Melville began a chapter of Moby Dick with an explanation of the rules of whaling. “A fast-fish,” he wrote, “belongs to the party fast to it…A Loose-Fish is fair game for anybody who can soonest catch it.”

Catherine O’Donnell is the author of Elizabeth Seton: American Saint (2018) as well as Men of Letters in the Early Republic: Cultivating Forums of Democracy (2008).  She is an Associate Professor of History at Arizona State University.

Mullen, Lincoln. The Chance of Salvation: A History of Conversion in America. Cambridge: Harvard University Press, 2017.