In 1794, the British and Corsicans joined together to form the Anglo-Corsican Kingdom. The historian R.R. Palmer argued that the island was driven by counter-revolutionary designs and this has remained the dominant view of historians.[1] Indeed, the Kingdom had clear aims. The British needed a base of operations in the Western Mediterranean from which they could combat the French revolutionary regime and bring the Italian and North African states into the First Coalition. The Corsicans, meanwhile, needed protectors against their recently spurned regicidal masters, the French. Moreover, Pasquale Paoli, the leader of the autonomous Corsican movement, had spent the last twenty years exiled in Britain and the match seemed perfect. On June 17, 1794, the Anglo-Corsican Constitution was promulgated and the counter-revolutionary Kingdom created.[2]

What seemed like the perfect counter-revolutionary alliance was in reality fraught with complications. Internally, there were numerous divisions stemming from religious differences, trouble with taxation, confusion over leadership, and more. At one point, a supposed insult concerning a bust of Pasquale Paoli nearly caused a full-scale revolt on the island. Externally, the union between Britain and Corsica proved to be equally troublesome. While the British saw their presence on Corsica as an opportunity to further both their own aims and those of the First Coalition, the Corsicans seemed intent on undercutting any message of unity. 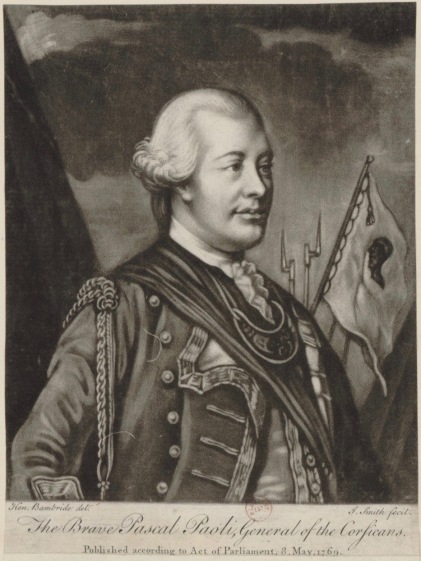 This is perhaps most evident in the case of the Corsican flag. The flag consists of a Moor’s head on a white background. According to legend, the head is that of a decapitated pirate from Algiers, wrapped in a white sheet. Even prior to the formalization of the Union between Britain and Corsica, the Corsicans took to flying this flag alongside that of their new protectors.[3] Once the union was official, the British tasked some of the smaller, coast-hugging Corsican ships to disrupt the French grain trade.[4] This was not necessarily problematic on its own, except for the fact that to most of the other powers in the Western Mediterranean, the Corsican flag was synonymous with piracy.

And indeed, this reputation was well-deserved. Their efforts against French economic interests are not well-documented, but their actions against potential British allies litter the diplomatic correspondence. The Corsicans did not just harass the grain trade; they took the umbrella of protection offered by the British and used it to stab at any former antagonists (which was essentially the entirety of the Western Mediterranean). They saved special ire for the Genoese, who owned and exploited the island from the 1400s until French annexation in 1769. The Corsicans also made their way to the Barbary Coast, where the simple sight of their flag inspired hatred and numerous Corsicans were caught and enslaved.[5]

Through all of this, the British maintained their support for Corsica and the Corsican flag, expressly stating numerous times that it was under protection from the British. They negotiated and paid for the release of Corsican prisoners from Algiers and Tunis, and effectively told the Genoese that they could not control the actions of the Corsicans, but they would protect them nonetheless. At the same time, the British also desperately sought some sort of an Italian League to combat the French threat, and pushed the Barbary Coast states to renounce neutrality and side with the Coalition.[6]

This dissonance between offering protection of the Corsican flag and disavowing the actions of the Corsicans is indicative of the problems the British faced in the War of the First Coalition in the Mediterranean. They attempted to form a Counter-Revolutionary Coalition, but their actions subverted the very system they were ostensibly protecting. The raison d’être for the Anglo-Corsican Kingdom was a failure. Instead of providing the British a base of operations to counter the Revolution, the Anglo-Corsican Kingdom only contributed to destabilizing an already unstable region.

Joshua Meeks is a historian of the French Revolution, with a particular emphasis on war and diplomacy in the Western Mediterranean. You can tweet him @Joshuameeks.

[2] Desmond Gregory’s The Ungovernable Rock (Fairleigh Dickinson Press, 1985), Chapter 5, has an excellent discussion of the Constitution. For a copy of the Constitution, see The Annual Register (London, 1794), Appendix to the Chronicle, 97.

Palmer, R. R. “The Kingdom of Corsica and the Science of History.” Proceedings of the American Philosophical Society, (August 1961): 345-60.