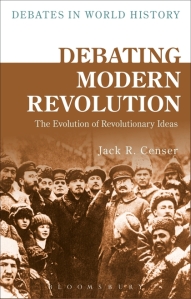 In conjunction with Bloomsbury Publishing and Jack R. Censer, Age of Revolutions is proud to offer its inaugural book giveaway. Check out Jack R. Censer’s post for AoR entitled “DEBATING MODERN REVOLUTION: A NOTE ON MARXISM AND NATIONALISM,” in which he reflects on writing this book and the ideological significance of Marxism in the history of modern revolutions.

The “revolutionary raffle” is now closed.

You may still subscribe to the site below. Doing so will automatically qualify you to enter any future book giveaways.

Read on below for a synopsis and initial reviews of the book.

Revolution is an idea that has been one of the most important drivers of human activity since its emergence in its modern form in the 18th century. From the American and French revolutionaries who upset a monarchical order that had dominated for over a millennium up to the Arab Spring, this notion continues but has also developed its meanings. Equated with democracy and legal equality at first and surprisingly redefined into its modern meaning, revolution has become a means to create nations, change the social order, and throw out colonial occupiers, and has been labelled as both conservative and reactionary.

In this concise introduction to the topic, Jack R. Censer charts the development of these competing ideas and definitions in four chronological sections. Each section includes a debate from protagonists who represent various forms of revolution and counterrevolution, allowing students a firmer grasp on the particular ideas and individuals of each era. This book offers a new approach to the topic of revolution for all students of world history.

Section I. The Birth of the Modern Revolution (1700-1815)
Section II. The Revolutionaries Regroup (1815-1848)
Section III. The Spread of Revolution beyond Western Europe and the Americas (1848-1949)
Section IV. The Post-Imperial World (1949-present)
Bibliography
Index

“While most studies of revolution attempt to uncover timeless similarities in the causes and development of revolutions, Censer explores the transformations over two and a half centuries of the concept of revolution itself: the dramatic evolution in the justifications, objectives, and strategies proposed by philosophers and practitioners from Thomas Paine and Karl Marx through Frantz Fanon, Che Guevara, and the Ayatollah Khomeini. It is an original and enormously engaging tour d’horizon of the subject in a global perspective, ideally suited for students young and old.” –  Timothy Tackett, Univeristy of California – Irvine, USA

“Censer has written a very readable narrative of revolution as a product of modern historical consciousness. Revolution has created an arc of self-redefinition; even as its meanings are layered, older ones are exchanged for newer ones to reach out to utopian ideals.” –  Prasenjit Duara, National University of Singapore

“Jack Censer’s aim is refreshingly bold: to conceptualise the different meanings of revolution in the modern era and to assess the importance of ideologies within them. He defines revolutions as cultural movements that set out to transform the existing order, both political and social, and in this book he adopts a global perspective, tracing the development of revolutionary ideas from America and France in the 1770s and 1790s to Iran and Tunisia today. The result is a wide-ranging and often provocative analysis that shows how the idea of revolution has evolved over the centuries and across continents.” –  Alan Forrest, University of York, UK

“Jack Censer has provided an enviably concise, lucid and thoughtful introduction to this crucially important subject. For anyone interested in understanding the ideas underpinning modern revolutions, and how the phenomenon of revolution itself developed through the modern period, Debating Modern Revolution is the perfect starting point.” –  David Bell, Princeton University, USA