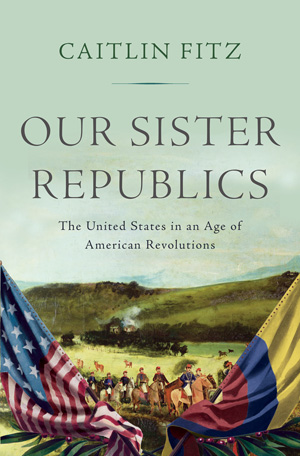 In conjunction with W.W. Norton and Caitlin Fitz, Age of Revolutions is proud to offer its third revolutionary raffle. Subscribe to the website in order to enter your name in the drawing for Fitz’s book. With your subscription, you will receive Age of Revolutions posts in your email. Subscribing now will also automatically qualify you to enter any future book giveaways.

The book giveaway is now closed. Congratulations to Carrie Glenn for winning this revolutionary raffle!

About Our Sister Republics and its Origins

I didn’t know if there would be enough to say.  I was one year into my Ph.D. program in American history, on an evening run, when it occurred to me that it might be interesting to write a dissertation on early U.S. relations with Latin America.  I had spent the year before in graduate school in Brazil, and I missed speaking Portuguese.

The next morning, I planted myself by a shelf in a deserted corner of the library, where I found magisterial mid-century histories of early inter-American relations.  The authors wrote of gallant diplomats and silver-tongued statesmen; they laid out grand strategies and lofty ideals.  Some cast their nets more broadly, scanning newspaper headlines and uncovering stories of intrepid non-state actors determined to spread revolution—or to thwart it.  The historians seemed nearly as heroic as their subjects.  I pictured them mastering multiple languages, boarding transatlantic steamers, strolling confidently into archives from Britain and France to Brazil and Chile, even as dictators and war overturned the world around them.  They emerged somehow with imposing books that seamlessly wove together diverse nations and sprawling empires.  They did this all on notecards and paper, without computers or digital cameras.

I was intimidated.  Was there anything left to contribute?

During an unrelated earlier research project, I had stumbled upon references to South American independence in places that surprised me: Nashville newspapers and eastern Tennessee antislavery writings.  I started sifting through other newspapers, online and on paper, to find out if Tennesseans’ early hemispheric interests were typical.  It was; indeed, I was immediately astonished by the amount of coverage that editors devoted to South America.  Around 90 percent of nationwide newspapers that I sampled reported on Simón Bolívar’s 1816 refuge in the Republic of Haiti, for example, or on the antislavery proclamations that ensued.  Around 80 percent reported on a transitory republican uprising one year later in northeastern Brazil.

I was even more taken aback by the popular demonstrations of inter-American brotherhood.  Between 1816 and 1825, more than half of Independence Day celebrations included toasts to Latin America.  Convinced that their “sister republics” were imitating the United States (a dubious proposition, but one that rebel agents were happy to reinforce in order to win support), delighted patriots who then wrote poetry about Brazilian insurgents.  They sang songs about Peruvian independence.  They wore cockades and hats in honor of the Americas’ latest revolutionaries.  Several hundred mothers and fathers even named their sons “Bolivar,” and several enslaved people seem to have taken the name Bolivar when they won their freedom.  Antislavery activists, meanwhile, optimistically celebrated independent Spanish Americans’ gradual antislavery efforts as examples for the United States.

Taken together, those grassroots displays of inter-American excitement shed new light on how ordinary people in the early United States understood republicanism, equality, and the nation itself during what I call the age of American revolutions — the half-century between the shot heard round the world in 1775 and the independence of Upper Peru in 1825, by which time most of the Western Hemisphere was independent from Europe and most of the new nations were republics.  (Spanish Cuba, British Canada, and the independent Brazilian monarchy were among the most prominent exceptions, and of course much of the Western Hemisphere remained under indigenous people’s control.)

The resulting book, Our Sister Republics, employs sources in English, Spanish, Portuguese, and occasionally French to address such questions as:

By answering such questions, Our Sister Republics complements the exciting recent work on how the French and Haitian Revolutions influenced the United States.  It draws on that scholarship and then looks further south, revealing how the United States emerged in a full-fledged age of American revolutions and showing why that mattered.

Title image: The Battle of San Lorenzo in 1813