Most scholars agree that the American Revolution, in contrast to the French, Soviet, and Chinese revolutions did not generate any radical alteration of the social or economic order.  And in contrast to the other revolutions, many of the same political leaders remained in power in the new United States after independence as had ruled prior to 1776.  Indeed, the transition from colonial assemblies to republican legislatures was almost seamless.  Like the social and economic regimes that pre-dated 1776, the political structures Americans created for the new United States bore more than passing resemblance to those of the colonial era.  In two states, Connecticut and Rhode Island, governments organized according to 17th-century English charters remained in place.  Though independence from imperial rule certainly marked a significant break with the past, many have questioned whether independence per se qualifies as revolution.  What, if anything, was revolutionary about 1776? 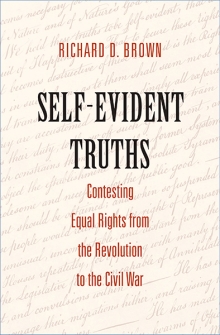 In Self-Evident Truths: Contesting Equal Rights from the Revolution to the Civil War, I examine the doctrine that was, arguably, the most revolutionary dimension of the American Revolution, the doctrine “that all men are created equal, that they are endowed by their creator with certain unalienable rights, that among these are life, liberty, and the pursuit of happiness.”  That a congress composed chiefly of slave-holding gentlemen (41 out of 56) should have endorsed this radical proclamation of “self-evident truth” is astonishing in itself, and has led subsequent generations to wonder whether they were expressing genuine beliefs, some kind of rhetorical hyperbole, or perhaps engaging in the manipulation of language.  Inasmuch as there were 56 members of the Congress, it is surely possible that any of these possibilities, or all of them, describe the viewpoints of some delegates.

Self-Evident Truths assesses Americans’ commitment—or lack thereof—to these principles across the roughly four-score and seven years between their declaration and the Civil War.  In chapters treating religion, nationality and ethnicity, race, gender, and class, I examine the extent to which the principle of equal rights was honored in fact or in the breach, and the public struggles surrounding these contests.  By considering state and national constitutions and statutes, public pronouncements, in addition to criminal trials and divorce cases, I am able to reveal ways in which Americans actually practiced government prescriptions, or subverted them.

As most historians would expect, I discovered a mixed picture.  Americans, broadly speaking, achieved a substantial measure of equal rights among their many religions and among their diverse peoples of European origin.  But although there was some movement toward equal rights for people of color and women, for them inequality was far more the rule than the exception. And when it came to class, Americans’ foundational commitment to individual property rights, heritable property rights, created a permanent obstacle to the full realization of equal rights.  Consequently, the radical, revolutionary promise of the Declaration of Independence would remain only partially fulfilled.  The promise was, surely, revolutionary.  But the realization of revolutionary principles, as illustrated in the United States, France, and China has never been straightforward or readily achieved.

Richard D. Brown is Board of Trustees Distinguished Professor of History, Emeritus, at the University of Connecticut. His previous books include Knowledge Is Power: The Diffusion of Information in Early America, 1700–1865; The Strength of a People: The Idea of an Informed Citizenry in America, 1650-1870; and the co-authored microhistories The Hanging of Ephraim Wheeler: A Story of Rape, Incest, and Justice in Early America and Taming Lust: Crimes Against Nature in the Early Republic. He lives in Hampton, CT.

One thought on “What Was Revolutionary in 1776?: Richard Brown’s Self-Evident Truths”