In May 2015, the Musée de l’Histoire de Nantes welcomed two of their most influential citizens of the eighteenth century to their permanent collection. The museum, housed in the Château des Ducs de Bretagne, received two portraits – one of Dominique Deurbroucq and the other of his wife Marguerite – both of which feature prominently in the main exhibition on Atlantic slavery and the slave trade in Nantes. Painted in 1753 by Pierre-Bernard Morlot, the Deurbroucqs are portrayed in all of the luxe of the century, accompanied by their domestic slaves who lived with them in Nantes.  I recently visited the collection and was particularly interested in the framing of these two portraits within the narrative of the tran-Atlantic slave trade and the history of Nantes.

For museums, memorial sites, and monuments, context is everything. Museum curators are tasked with recreating a narrative of the past through material artifacts, which often obscure the historical record. Christine Chivallon refers to this museographical practice in France as a particular “desire to make slavery visible, or rather the desire to voice slavery through the language of the patrimony.”[1] The paintings of the Deurbroucqs seem to be anodyne representations of a wealthy family, especially for younger museumgoers. For this reason, the curatorial staff at the Musée de l’Histoire de Nantes make definitive choices in the way they frame the husband and wife – arguing that the portraits are perfect examples of how wealth in Nantes was built on the backs of slaves and the Atlantic slave trade.

Born in Nantes to a family of Dutch merchants, Dominique Deurbroucq and his brother Simon prospered off of Atlantic commerce. Although, mostly partaking in the importation of colonial products from the Antilles – principally from Saint-Domingue – the brothers financed expeditions destined for the slave trade between 1740 and 1749 to Cap-Français.[2] According to the Musée’s website, in 1755 the company Deurbroucq frères experienced difficulties as a result of the Seven Years War and began exporting French wine to the countries of Northern Europe. It is just before this shift in commercial activity that Dominique and Marguerite sat, accompanied by their slaves, for Morlot’s portraits.

The portraits of Dominique and Marguerite Deurbroucq are accompanied by traditional museum plaques in French, describing the key figures and situating them temporally within Nantes’ history. However, the curators also provide separate, tri-fold, laminated brochures dissecting the paintings with great aesthetic and historical rigor. By making this information available, especially considering the brochures are available in English and Spanish, the exhibit’s curators seek to frame the paintings within a context of Atlantic commerce and the slave trade. Zooming in on the two figures of color, both domestic slaves, the first sentence of the brochures declare “[this] young boy is a slave/[this] young woman is a slave [Ce jeune garcon est un esclave/Cette jeune femme est une esclave]” in bold font. Rather than allowing the two figures to fade into obscurity, leaving visitors to wonder what their civil status might have been, the curators directly intervene to clarify the historical realities of slavery in Nantes. 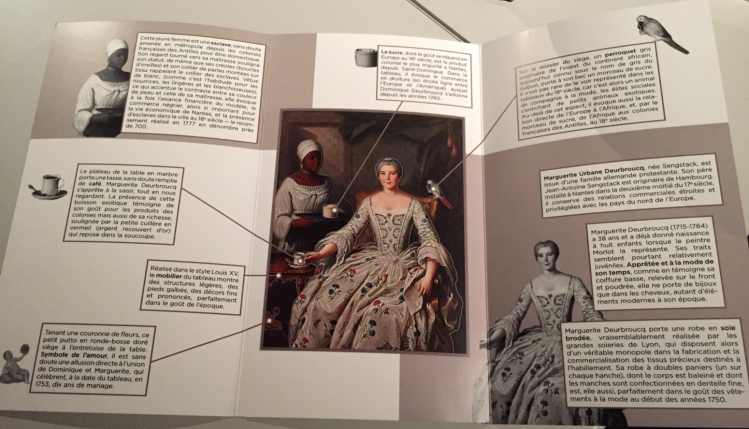 The legend for Marguerite’s unnamed domestic slave reads: “the slave trade, so important for economic life in Nantes, and the presence of slaves in the city during the eighteenth century.” The 1777 census, according to the museum, counted close to 700 slaves living in Nantes. The curators continue their analysis of Marguerite’s painting, discussing the importance of clothing, colonial products like sugar and coffee, and ornamental aspects of the portrait, which attest to the origins of the Deurbroucq’s wealth and their colonial tastes. The brochure also details the female slave’s attire, noting that her necklace makes reference to the collars slaves were forced to wear as punishment, and that her white clothing resembles what a wet-nurse or a laundress would wear in the slave-holding Antilles.

In Dominique’s portrait, he is depicted with his dog and a young child slave. The curators are careful to qualify Dominique’s slave as a child, confirming the realities of colonial slavery. Focusing on the aesthetic history of portraiture, the brochure points to the significance of the dog, whose stare is focused on Dominique. In portraiture, this canine motif often exists as a symbol of fidelity, and because the child stares in the same direction as the dog, the sentiment of fidelity is transferred from the dog to the enslaved child. The curators also signal the importance of the golden collar, which aesthetically marks the child as Deurbroucq’s human property. By highlighting the master/slave relationship in the portrait, the Musée intervenes directly in the historical narrative of Nantes to render the presence of slaves and the support for the slave trade visible. Furthermore, by drawing attention to the enslaved status of both the child and the young women, museum visitors are able to situate and begin to process the history of slavery and the slave trade in Europe, rather than dismissing it as a colonial venture that never touched French soil. 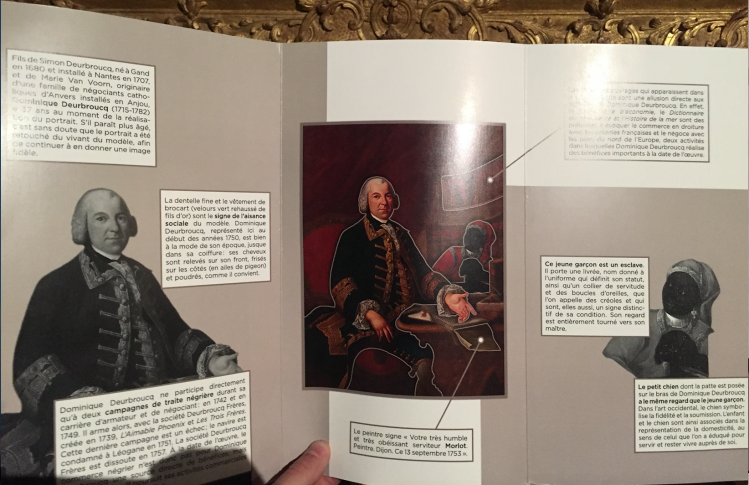 Adjacent to the Deurbrouqc portraits is an old poster, advertising a series of events organized by a group of academics, activists, and concerned citizens of Nantes dealing with the tercentennial of the Code Noir. According to the poster’s legend, the group originally proposed a project called “Nantes 1985, from the Code Noir to the Abolition of Slavery,” which the city refused to finance.[3] Only until 1993, when the Château des Ducs de Bretagne held an exhibit sporting a rather vacuous title, “The Annals of Memory,” did the city of Nantes publicly engage with its slave-holding past. While this is not to say that the city’s current narrative is perfect, the curation of the Deurbroucq portraits reveals that curators and public institutions are more actively confronting the problematic nature of the past, particularly concerning slavery, without evacuating the humanity of the enslaved in favor of a glorious or heroic European (read: white) past.

Nathan H. Dize is a PhD student in the Department of French and Italian at Vanderbilt University where he specializes in Haitian theater, poetry, and performance from the colonial era to the present. He is a content curator, translator, and editor of A Colony in Crisis: The Saint-Domingue Grain Shortage of 1789.  He is also the co-editor of the H-Haiti series “Haiti in Translation,” which interviews translators of Haitian writing.

Chivallon, Christine. “Representing the Slave Past: The Limits of Museographical and Patrimonial Discourses.” In At the Limits of Memory: Legacies of Slavery in the Francophone World, edited by Nicola Frith and Kate Hodgson, 25–48. Liverpool: Liverpool University Press, 2015.

Frith, Nicola. “The Art of Reconciliation: The Memorial to the Abolition of Slavery in Nantes.” In At the Limits of Memory: Legacies of Slavery in the Francophone World, edited by Nicola Frith and Kate Hodgson, 68–89. Liverpool: Liverpool University Press, 2015.

Hourcade, Renaud. “Commorating a Guilty Past: The Politics of Memory in the French Former Slave Trade Cities.” In Politics of Memory: Making Slavery Visible in the Public Space, edited by Ana Lucia Araujo, 124–40. London: Routledge, 2013.

———. “Shaping Representations of the Past in a Former Slave Trade Port: Slavery Remembrance Day in Nantes.” In At the Limits of Memory: Legacies of Slavery in the Francophone World, edited by Nicola Frith and Kate Hodgson, 90–108. Liverpool: Liverpool University Press, 2015.

Peabody, Sue. “There Are No Slaves in France”: The Political Culture of Race and Slavery in the Ancien Régime. 1 edition. New York: Oxford University Press, 2002.

[1] Christine Chivallon, “Representing the Slave Past: The Limits of Museographical and Patrimonial Discourses,” in At the Limits of Memory: Legacies of Slavery in the Francophone World, ed. Nicola Frith and Kate Hodgson (Liverpool: Liverpool University Press, 2015), 25–26.

[3] For more on the public memory and historical narrative on slavery in Nantes, see: Renaud Hourcade, “Commorating a Guilty Past: The Politics of Memory in the French Former Slave Trade Cities,” in Politics of Memory: Making Slavery Visible in the Public Space, ed. Ana Lucia Araujo (London: Routledge, 2013), 124–40.