This post is a part of a series entitled “(In)forming Revolution: Information Networks in the Age of Revolutions.”

There are numerous digital tools for studying networks that can be of use to humanists. One such tool is Palladio, a digital humanities package developed in the Humanities + Design Lab at Stanford University.[1] Palladio lends itself to qualitative studies because the visualizations that it produces (maps, network diagrams, and tables) are familiar to most humanists, and because it allows for the filtering of data through categories chosen by the user. Digital tools offer an opportunity to pursue such research with lower technical barriers to intervention—including easier communication, tools for sharing data, and collaborating on writing. Visualization tools like Palladio allow academics to produce their own diagrams without necessarily hiring a designer.

In a pair of posts I will walk through some examples of diagrams produced in Palladio. In the first post, I will show how maps can be used to compare the weight, or influence, of cities, as well as travel and communication between cities and other geographical points. The second post will show how network graphs can be used in the study of networked people or things. I will use a small and relatively uncontroversial dataset: the network of 140 encyclopédistes: writers, artists, and scholars who participated in the writing and/or illustration of Diderot and d’Alembert’s Encyclopédie, one of the core projects of the French Enlightenment. The dataset is a marked-up version of the list produced by Frank Kafker for The Encyclopédistes as a Group, published in Recherches sur Diderot et sur l’Encyclopédie in 1989 and 1990.[2] Kafker’s list of encyclopédistes is enriched with data from the Electronic Enlightenment project and a subset of a dataset that I produced collaboratively with Maria Teodora Comsa, Chloe Edmondson, Dan Edelstein, and Claude Willan, according to the methods that we described in “The French Enlightenment Network.”[3] This article explains how the dataset is structured and why it is structured that way.

I have made the encyclopédistes dataset available online in multiple formats (see folder). While I cannot fully explain how the dataset is structured or how it was created in this post, it is worth knowing that the data is a list of individuals with basic demographic data (name, birth and death places and years, nationality, gender, etc.); it also places the encyclopédistes into other groups, or networks, such as “Letters_Philosophical” for writers on philosophical subjects, and “Artist” for illustrators. If you are interested in the structure of the data, I encourage you to open the Google Sheet or the Tab-Separated Values file and take a look at the raw data.

For the sake of this demo, I recommend opening the JSON document—that is, the preformatted version—in Palladio by following these steps:

2) Open Palladio in your browser: http://hdlab.stanford.edu/palladio/.

4) Select the tab that you would like to see. For this demo, please choose “Map.”

The first type of diagram consists of points on a map, in this case, the birthplaces of all 140 encyclopédistes (Fig. 1). The circles represent cities; they are sized according to the number of encyclopédistes who were born in that city. This sort of diagram is useful precisely because it is intuitive to humanists and to the general public. The basemap is overlaid with the “Streets” layer, which provides city and state names in the language of each country. The very small circles represent only one or two individuals and the largest circle represents Paris, with a total of 32 individuals. Since we only know the birthplace of 121 encyclopédistes, Paris’s 32 individuals represent approximately one-quarter of the known birthplaces of encyclopédistes. This map allows us to identify the dominance of Paris as a birthplace for the encyclopédistes; it also calls attention to outliers like Berlin, Penamacor, and Warsaw. Perhaps the map’s greatest value is in quickly and easily identifying rival centers like Geneva (4), Lyon (5), and Montpellier (4), in a way that is intuitive to most people.

Producing diagrams of this kind requires LatLong coordinates for all locations. Such maps can easily display quantities associated with a particular place—for example, quantities of people, events, or items. These maps are recommended for population data, data on the production of books, or number of events.

Figure 1: Birth Places of the Encyclopédistes

The second diagram (Fig. 2) is a point-to-point diagram linking birth and death places of the same 140 individuals; this layer is overlaid on the same basemap (“Streets”). Again, Paris emerges as a hub, with the most encyclopédistes having been born (approx. 25%), died (around 55%), or both (around 20%) in Paris. Paris is even more culturally weighty, given that born Parisians generally died in Paris and many people born outside of Paris died there. Few encyclopédistes were born and died in cities unconnected to Paris in this narrow sense; for example, the Polish aristocrat Michal Kazimierz Oginsky (1728-1800) was born and died in Warsaw, though he also spent time in Paris. The French mathematician Jean-Joseph Rallier des Ourmes (1701-1771) was born and died in Brittany. This sort of diagram allows us to see quickly which people moved to Paris and died there, and which people either stayed in their home cities or returned there after participating in the writing of the Encyclopédie. For example, only one of four encyclopédistes from Geneva died in Paris. The cultural dominance of Paris among this elite group is further seen in that only a few encyclopédistes were born and died in different cities neither of which were Paris, with most of those people having spent significant time in there. Jean-François Marmontel (1723-1799), born in Bort-les-Orgues and deceased in Habloville, is one notable example. 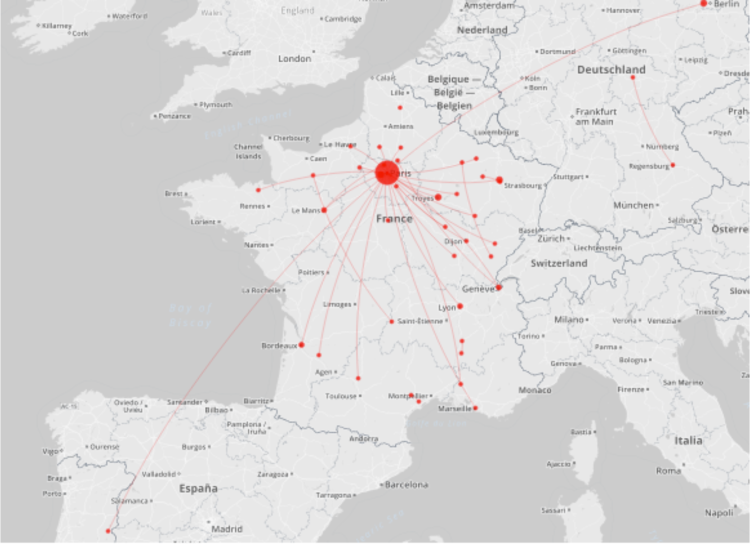 Maps of this kind are ideal for displaying trajectories, such as travel, or communication between population centers, such as the sending of letters. This map type requires LatLong coordinates for two distinct locations. The edges—the connections between points—could represent any number of other network relationships between two locations. The points are sized according to the total count of the items associated with that location. What is clear already from the pattern in these birth and death places is, once again, the predominance of Paris as a hub of the encyclopédistes network.

While maps are not new tools for humanists, digital technology allows for more sophisticated and rapid comparisons between subsets of data. Palladio makes filtering data easy and quick; in fact, producing a different map takes only a few seconds. In this case, the 140 individuals have been coded by gender, nationality, social networks (Elite, Aristocracy, Military, Court), professional networks (Artisan, Finance-banking, Cultural, etc.), and by knowledge networks (Letters, Sciences, etc). These individuals also have birth years, death years, birthplaces, and death places associated with them, where this data is known. Filtering allows us to look at a series of maps and compare them easily.

The first map with filtered data (Fig. 3) shows those encyclopédistes who are in the “Letters_Literary” category—that is, authors of literary works, as well as historians and authors writing on art, theater, or other artistic pursuits. This is one of the most common networks; unsurprisingly, the map of linked birth and death places for the “Letters_Literary” category looks quite similar to the map of all known birth and death places (Fig. 2).

Figure 3: Linked Birth and Death Places of Encyclopédistes in the “Letters_Literary” Network

Figure 4: Linked Birth and Death Places of Encyclopédistes in the “Sciences_Medicine” Network

The linked birth and death places of encyclopédistes in the “Sciences_Natural” network show a greater predominance of Paris than does the “Sciences_Medicine” network (Fig. 5). The map is more oriented towards the North and the East than the other maps.

Figure 5: Linked Birth and Death Places of Encyclopédistes in the “Sciences_Natural” Network

Filtering allows us to see and visualize changes over time or space. It would be very difficult to remember the birth and death places of all of the members of any of these networks, much less to be able to compare them systematically. Such a task is far easier when the networks are displayed as “small multiples”—that is, a series of images that allow the viewer to compare visualizations easily (Fig. 6).

In this post, we’ve explored two map types: 1) maps with points sized according to defined quantities, which are useful for displaying static geographic information, and 2) point-to-point diagrams, which are more useful for showing movement or change over time. The point-to-point maps are particularly useful for humanities research because they show network connections in a way that is intuitive to humanists by overlaying them on a map. The geography of the encyclopédistes could be further complicated by studying the effects of time, nationality, and social status, all categories included in my dataset, which can serve as filters in the same way that knowledge networks were in figures 3-6.

This post is the first in a two-part series. The second post (out on 9/27) explores the use of network diagrams in Palladio.

Melanie Conroy is assistant professor of French at the University of Memphis. She received her doctorate from Stanford University in 2012. Her research explores the intersection of literature, visual studies, and social networks in modern French culture. She is the co-director of the Salons Project, a part of Mapping the Republic of Letters.

[1] Palladio allows for the presentation of multifaceted data, such as network data with date ranges or categories such as network type with location data. Palladio was developed in the Humanities + Design Lab, by Dan Edelstein, Nicole Coleman, Ethan Jewett, Giorgio Caviglia, et al. For more information or try it out, see http://hdlab.stanford.edu/palladio/.

One thought on “Visualizing Social Networks: Palladio and the Encyclopédistes, Pt I”