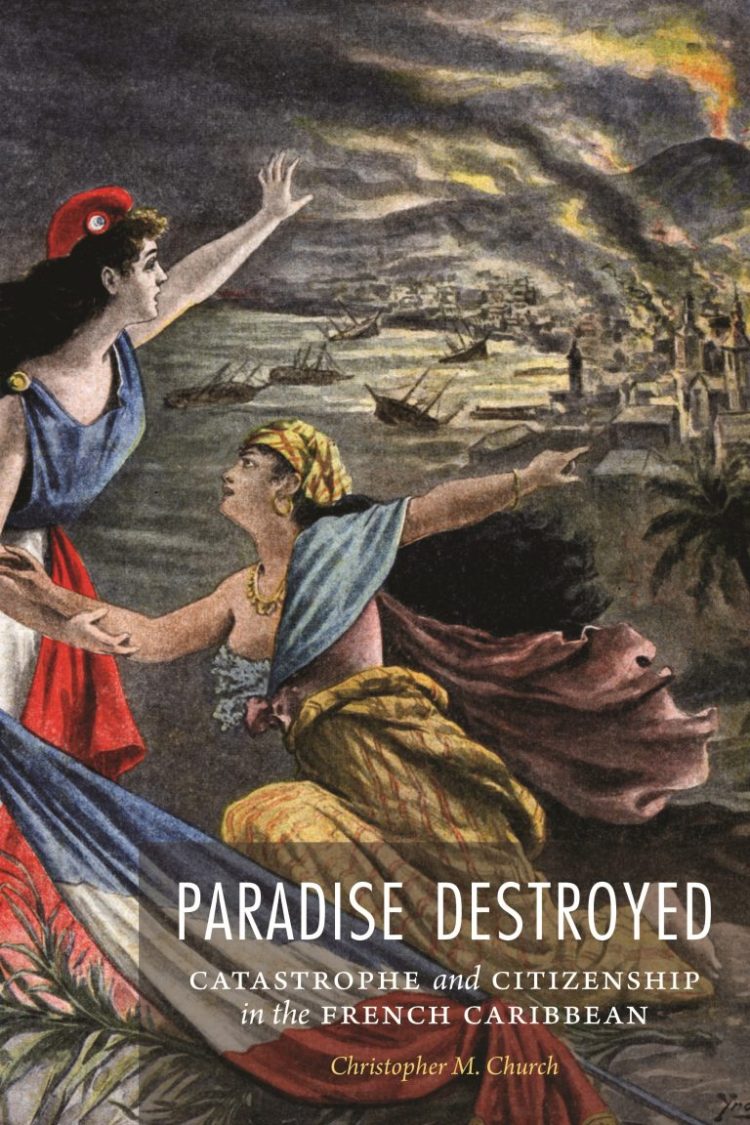 [*We will only use this information to contact the winner of the drawing.*]

And Samantha Wesner is our winner!

Over a span of thirty years in the late nineteenth and early twentieth centuries, the French Caribbean islands of Martinique and Guadeloupe endured natural catastrophes from all the elements—earth, wind, fire, and water—as well as a collapsing sugar industry, civil unrest, and political intrigue. These disasters thrust a long history of societal and economic inequities into the public sphere as officials and citizens weighed the importance of social welfare, exploitative economic practices, citizenship rights, racism, and governmental responsibility.
Paradise Destroyed explores the impact of natural and man-made disasters in the turn-of-the-century French Caribbean, examining the social, economic, and political implications of shared citizenship in times of civil unrest. French nationalists projected a fantasy of assimilation onto the Caribbean, where the predominately nonwhite population received full French citizenship and governmental representation. When disaster struck in the faraway French West Indies—whether the whirlwinds of a hurricane or a vast workers’ strike—France faced a tempest at home as politicians, journalists, and economists, along with the general population, debated the role of the French state not only in the Antilles but in their own lives as well. Environmental disasters brought to the fore existing racial and social tensions and held to the fire France’s ideological convictions of assimilation and citizenship. Christopher M. Church shows how France’s “old colonies” laid claim to a definition of tropical French-ness amid the sociopolitical and cultural struggles of a fin de siècle France riddled with social unrest and political divisions.

List of Illustrations
List of Maps
List of Tables
Acknowledgments
Introduction: Colonialism, Catastrophe, and National Integration
1. French Race, Tropical Space: The French Caribbean during the Third Republic
2. The Language of Citizenship: Compatriotism and the Great Antillean Fires of 1890
3. The Calculus of Disaster: Sugar and the Hurricane of 18 August 1891
4. The Political Summation: Incendiarism, Civil Unrest, and Legislative Catastrophe at the Turn of the Century
5. Marianne Decapitated: The 1902 Eruption of Mount Pelée
Epilogue: National Identity and Integration after the First World War
Notes
Bibliography
Index

“Christopher M. Church shows us that disasters do indeed reveal some significant facts about the risks and stresses of life in the French colonial Caribbean. . . . Church’s book is well-researched, highly detailed, and tightly argued using a wide range of primary sources, including some illuminating statistical data. It introduces new insight into the story of the French Caribbean by shifting the focus towards the human/nature interaction while also showing how environmental concerns were deeply intertwined with political economy, race, and colonial/metropolitan relationships. . . . The book makes a significant historiographical intervention at the intersection of French colonial studies and environmental studies and should become a model for future work in this area.”—Jeffrey H. Jackson, H-France Review

“With a timely focus on environmental disaster and its political ramifications, Christopher Church has given us a highly original and multidisciplinary view of an understudied period in Caribbean history.”—David Geggus, professor of history at the University of Florida and editor and translator of The Haitian Revolution: A Documentary History

“Christopher M. Church offers compelling short narratives of the various disasters that struck the colonies, and his analysis of the politics of relief is sophisticated and informative. . . . It is a book that will interest scholars in a wide range of fields, including French imperial studies and Caribbean history. It is also a welcome and significant contribution to the history of disasters.”—Matthew Mulcahy, professor of history at Loyola University at Maryland and author of Hubs of Empire: The Southeastern Lowcountry and British Caribbean

“Christopher Church offers a richly researched, well-told, and insightful account of the political, economic, and social impact of natural disaster in the late nineteenth- and early twentieth-century French Antilles, profoundly deepening our understanding of these societies.”—Laurent Dubois, Marcello Lotti Professor of Romance Studies and History at Duke University and author of Haiti: The Aftershocks of History

“Trouble in paradise! In this engaging, innovative, and well-researched study, Christopher Church uses the history of disasters to explore interactions between environmental, colonial, and political history in the French West Indies. . . . Paradise Destroyed adds an important new dimension to the history of modern empire, showing how France’s ‘colonies of citizens’ could be both exotic and familiar, colonial and French at the same time.”—Tyler Stovall, Distinguished Professor of History at the University of California, Santa Cruz, and author of Transnational France: The Modern History of a Universal Nation

Don’t want to miss our next book giveaway? Consider subscribing!