This post is a part of our “Challenging Democratic Revolutions” series, which explores the ways in which democratic ideologies challenged Old Regimes and how revolutionaries challenged notions of democratic liberty.

By Bryan A. Banks

Over the last two decades, historians have turned to transnational studies and in doing so, have resurrected R.R. Palmer’s two-volume The Age of Democratic Revolution: A Political History of Europe and America, 1760-1800. Palmer’s first volume in particular won the Bancroft (1960), but was then left to the dusty shelves of specialists and university libraries. In the wake of the French Revolution’s bicentennial in 1989, this political history of the revolutionary age became the “classic” in the field and the subject of revision. As Marcus Rediker described, this “immensely important project” of revising Palmer [1] would eventually run the revisionist gamut through issues of gender, race, and place (especially in regards to the revolutionary movements in Haiti and Latin America). While many of these issues simply were not in Palmer’s purview, what I want to do is focus on the issue of religion in Palmer’s corpus, a subject central to his earlier work but remiss in his later two volumes on the Age of Democratic Revolution. 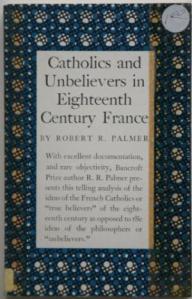 I first encountered Palmer in his  Catholics and Unbelievers in Eighteenth-Century France (1939). In many ways, this book set the tone for my reading of faithful figures in an age supposedly driven by secular reason. Palmer’s interpretation of Catholic believers owed much to his mentor, Carl Becker, whose work The Heavenly City of Eighteenth-Century Philosophers (1932) argued that the Enlightenment philosophes thought within a “climate of opinion” shaped by religious ideals, even as they struggled against them. Palmer argued that “believers” were more enlightened — or at least had developed arguments that were more sophisticated — than those Enlightenment ideas they sought to discredit.[2] In Catholics and Unbelievers, Palmer makes a similar argument about the role Jesuits played in shaping the eighteenth-century’s intellectual culture. With his earlier insistence on the enlightened character of believers, it struck me as odd when I first picked up The Age of Democratic Revolution that Palmer began with the following epigraph by the Dutch statesman Gijsbert Karel van Hogendorp:

Two great parties are forming in all nations … For one, there is a right of government, to be exercised by one or several persons over the mass of the people, of divine origin and to be supported by the church, which is protected by it. These principles are expressed in the formula, Church and State.

To this is opposed the new system, which admits no right of government except that arising from the free consent of those who submit to it, and which maintains that all persons who take part in government are accountable for their actions. These principles go under the formula, Sovereignty of the People or Democracy.

Since “believers” were so important to his early research, it was strange to see Palmer silence the faithful in favor of a secular liberal modernity. The secularity is self-evident in Palmer’s definition of the revolution and, in many ways, it negates the modernist tone of his earlier work. If Catholics could be more “modern” during the Enlightenment, then why could they not be modern in the revolutionary experiment? Is it possible that Palmer’s omission of the role of religious individuals during the revolutionary period led him to define the period in democratic, secular terms? Or perhaps the rhetoric of people like Hogendorp or the leaders of the de-Christianization campaign obfuscated the role of believers in Palmer’s narrative?  Palmer seems to have better acknowledged this tension or omission in what would have been a biography of abbé Henri Grégoire had his eyesight not failed him.

Palmer’s adoration for the separation of Church and State and his desire to color the Age of Revolutions as the cradle of the modern world effaced the ways in which believers acted in and upon those revolutionary changes of the period. The same can be said for those revolutionary upheavals, which did not conform to his western perspective — namely violence and regime change in the Caribbean and Latin America.

While Palmer may have abandoned Catholics in his own work, his students did not. Dale Van Kley, perhaps one of the most active of Palmer’s students, addresses Palmer’s legacy in an article, noting that Palmer’s 1939 book on the importance of Jesuits in the Enlightenment appeared strange to the historian later in his life. Van Kley picked up his mentor’s earlier charge (to rethink the importance of believers in the supposedly secular Enlightenment), making a case for the Jansenist origins of the French Revolution.[3] Van Kley’s work embodies his mentor’s devotion to political history with a better attention to what has come to be called political culture, but he does not take up the trans-Atlantic, revolutionary focus of his mentor.[4]

Yet there are ways to bring out the stories of believers on the international level during the Age of Revolutions. They require using alternative sources from those relied on by Palmer. My work on Quakers in the Atlantic World takes a prosopographical angle to critique Palmer’s omission of believers from his narrative of the Age of Revolution. During the American Revolution, the Quaker Rotch family left Nantucket after finding many revolutionary Americans who were hostile to their pacifist principles. Famously, William Rotch sank a shipload of bayonets rather than let American or British soldiers use them for war. The Rotch family relocated to Dunkirk, France in the hopes of retaining some presence in the north Atlantic whaling industry. Across the Atlantic, the family encountered a nascent Quaker community in southern France led by Jean de Marsillac.

When the French Revolution broke out in 1789, the fate of Quakers in France seemed precarious. On one hand, the French idolized the Quaker Friends, who they understood to be “Christian Deists,” as Voltaire once noted in his Essai sur les moeurs (1756).[5] It was rumored in the 1750s and 60s that Voltaire planned to establish a colony for the philosophes just outside of Philadelphia. Imagine it — a French philosophical, Quaker colony, where Friendship was the political ethos.

Many Frenchmen followed suit in their adoration of the “imaginary Friend” conjured by Voltaire, but others in the Atlantic World were skeptical of the French fascination with Quakers.[6] Readers like Benjamin Franklin saw Voltaire’s Quaker as purely imaginary. Writing to Colonel Henry Bouquet in 1764, Franklin remarked on the unbelievable depiction of the “able painter” Voltaire, whose distance “‘tis no small advantage to us that he views us.”[7] There are a number of ways to interpret Voltaire’s praise of the American Quaker beyond its fantastical character. Arguably best known for his designs to écrasez l’infâme — that is, to tear down the institution of the Roman Catholic Church, and to strip the wool of blind faith from the world — it would be very easy to read Voltaire’s Quakermania as a mere photonegative critique. Quakers were peaceful; Catholics fueled wars with their intolerant religious rhetoric. Quakers were ascetic; Catholics were consumed by wealth and ornament. Quakers embraced equality; Catholics depended on a strict hierarchy. It is also possible that Voltaire’s Quaker embodied a frontier of possibilities because Voltaire was still mapping his own intellectual frontiers. Perhaps Quakerism acted as a necessary lens through which he could make his worldview clearer.

In 1789, Quakers came to embody the possibility of trans-Atlantic revolution. All the ideals of the American Revolution seemed to be embodied in the Quaker — some Frenchmen even took Franklin to be a Quaker and an ideal revolutionary. So it was notable to find Quakers in France and even more so to find them defending their rights in front of the National Constituent Assembly on February 10, 1791, requesting that the revolutionary body protect their Quakerism. But ultimately, they failed in the face of civil and foreign war. The Rotch family and the French Quaker Marsillac brought the petition. They had hoped to exploit French misperceptions of their faith in order to safeguard their community, but as the Revolution turned to Terror and war, the pacifist Quaker was increasingly at odds with the political culture of the time. The Assembly rejected their petition. The Revolution abandoned Friendship as a guiding enlightened Christian vector. As different revolutionary factions took the path to war, Quakerism became a dangerous liability — just as many patriots recognized during the American Revolution.

In his 1793 play Allons, ça va, ou le Quaker en France, the titular Quaker sings, to the tune of the “Marseillaise,” four stanzas blending the revolutionary pursuit of liberty with Quaker Friendship: “Français! un peuple libre est un peuple d’amis.” [Frenchmen, Frenchmen, a free people are a people of friends.][8] In the audience, a journalist saw Reigny’s adoration for the Quaker — akin to that of Voltaire’s — as treasonous. With war pending both at home and abroad, such pacifist pipe dreams could not be tolerated. Moreover, to grant Quakers exemption from swearing the oath to the nation and taking up arms in her defense would set a dangerous precedent by which Catholics could regain their Old Regime privileges in the name of religious liberty. In the same year, a group of American Quakers who had settled in Dunkirk after fleeing the American Revolution fled the Terror and French Revolutionary Wars.

This story and others are missing from Palmer’s work. By reintegrating the faithful into the story of the Age of Revolutions, we can see the ways in which believers shaped revolutionary universalist doctrines, without reifying a teleological and essentially liberal secular worldview — one which undergirds Palmer’s The Age of Democratic Revolutions.

Bryan A. Banks is Assistant Professor of History at Columbus State University. He is currently completing a monograph on the role of Huguenots in the making of modern French political culture. His work has appeared in Eighteenth-Century Studies and French History. He also co-edited a volume entitled The French Revolution and Religion in Global Perspective: Freedom and Faith (New York: Palgrave, 2017). He tweets @Bryan_A_Banks.

[2] Historians have returned to Becker and Palmer’s early work of late via J.G.A. Pocock’s pluralization of the Enlightenment and David Sorkin’s “Religious Enlightenment.” See my article on Rabaut Saint-Étienne and the Protestant Enlightenment in France too.

[4] Van Kley’s latest book explores the international suppression of the Jesuit order in the eighteenth century.