“Everyone is looking for their own revolution,” Abel Mestre wrote in a recent Le Monde article surveying the profusion of historical references in the Gilets Jaunes protests. He quoted Phillipe Burrin analyzing Revolutionary references during the Occupation, when he said: “French political culture is a historically conflictual culture, that is to say it thinks historically about its conflicts, and conflictually about its history.”[1] Calls to storm the Bastille have not been absent from recent protests, nor references to the Paris Commune, nor even 1848. Commentary on French protests, both in France and especially outside it, quickly become a search for historical comparisons, feeding a narrative of repetitive crises which satisfies some broad cultural assumption about “Frenchness.” Either this feeds an anglophone exoticization of France, which Eric Fassin lampooned when he held that: “nothing ever happens in France except the eternal return of Frenchness in its confrontation with history.”[2] Or, indeed, it confirms a domestic sensitivity as Pierre Labori put it, “the French are known for their passion for history. Their own history, preferably. Or, more precisely, a series of images they create of themselves and in which they believe they recognize themselves.”[3] This historical fumbling arises in part from a desire for dramatic narrative, but also a genuine attempt to understand seemingly novel protests. The decentralized, distributed nature of the Gilets Jaunes is striking, rallying around technical points of contention as part of a diffuse dissatisfaction with government. Yet, if everyone is looking for their own revolution in these protests, then they are also bringing their own baggage to them.

The symbol of this protest, the yellow vest, is effective by dint of its ubiquity, and as a highly visible symbol of government regulation. Indeed, driving lies at the heart of these protests, while remaining one of its greatest misdirections. Listing checks, taxes, costs and contradictions affecting the ordinary motorist, the polite and precise Jacline Mouraud became a Facebook sensation as her video rebuke to the Presidency went viral. This seemed to build on the «Coût de pompe» campaign launched in mid-September by “40 Million Automobilistes,” protesting against fuel duty (and building on opposition to national speed limit capping at 80 km/h), as well as a subsequent change.org petition.[4]  In her original “coup de gueule,” Mouraud spoke of a “forest of speed cameras” across France. Surely enough, as the movement spread through Facebook events and groups, acts of vandalism against the totems grew, to the extent that Europe1 reported on 10th December that nearly half of the country’s speed cameras had been put out of action, with some rural departments now totally uncovered.[5] This sort of action embodies the pervasive, daily frustrations that drew many to identify with the protests. Protesters first gathered in towns to stop traffic and protest about the costs of driving, which saw them dubbed “the Robin Hoods of the Roundabouts,” a visible presence across France’s towns and cities.[6] So too with toll roads, which announcements in October indicated would be automated, with new fines to prevent evasion.[7] During protests, toll booths have been widely occupied and opened for free passage. One couple even tied the knot at an occupied toll plaza in the Hautes-Pyrénées. Decked out in high-vis finery, two protesters declared their revolutionary love in symbolic nuptials presided over by the local magistrate.[8]

While the burning of customs gates into Paris in 1789 fueled the festival atmosphere leading up to the storming of the Bastille, the freedom of the roads and the occupation of the roundabout represents an opportunity for social encounters and the development of further action.[9] More broadly, the concerns around taxation and ‘the little man’ make the protests read more like the unstructured Poujadiste tax protests of 1953 (before they took on organized party form), trying to defend the small-scale artisanat from an expanding and modernizing state, which sought to transform France in line with post-war development.[10] This Poujadiste accusation has dogged the Gilets Jaunes given their vocal rejection of ecological taxes, even if they contend their platform is about broader economic inequality. As the Poujade movement showed, however, protectionist rejections of individual measures seldom stay anodyne for long, and can soon settle around a more reactionary political platform (especially fueled by conspiratorial Facebook culture).

Frustrations around motoring can be parceled into the larger concern of “pouvoir d’achat” or “purchasing power,” a leitmotif of the Gilets Jaunes protests.[11] Given the concept’s blurring across and between political boundaries, the movement has skirted overt association with normative left- or right-wing political parties. Surveys attempting to map political allegiance have tended to find the movement crowding around the extremes, suggesting any systematic attempt to accommodate their demands (the provenance of which differs in credibility) would likely take voters already dabbling with Mélenchon’s Insoumise, or Le Pen’s Rassemblement.[12] Unlike Poujade’s call to supporters to ‘Sortez les sortants’, however, the movement has yet to mobilize around the ballot box, instead exhibiting the early “alarmist populism” Jean Pierre Rioux described as a sort of democratic defense mechanism amidst broad popular dissatisfaction.[13]

Broad frustrations about purchasing power are down because of much longer social processes, and are tied to continuing reactions to deindustrialization and the changing nature of the French economy.[14] Sociologist Jean Viard has written at length about the ways in which mobility and suburbanization have had subtle effects on the political loyalties of those who perceive themselves as left behind in a series of peripheries that has stretched the definition and identification with “la France péripherique.”[15] The prominence of motoring issues has mobilized protestors from beyond the city centers, whose reliance on car travel has seen purchasing power specifically dented by the recent reforms mentioned. Burgeoning suburban populations (often employed insecurely in the private sector, and lacking the vaunted protections of the public sector) have seen the emergence of what Jean Viard calls “commuter democracy,” as voters favored policies that addressed domestic issues over employment, looking for representation in the suburbs in which they lived and not the cities where they worked: “local democracy is commuter democracy, against development, against immigration, and where local elites become conservative by dint of events.”[16]

Broad support for the movement in polls does not equate to either a mass expansion of the periphery, nor mass active participation in protests, however, and clearly the amorphous demands of the movement allow many to project onto it their own wishes.[17] What has unified it is the personal dislike of Macron, rallying around the term “President of the rich” (which graduated from accusations of being the “Candidate of the rich,” which Marine Le Pen hammered during the election campaign).[18] Yet, this seems to be more strongly linked to the dislike of forebears like Sarkozy, than any specific historic reference to King Louis-Philippe’s caricatured bourgeois decadence.[19]  Macron’s labour reforms brought about less protest than many thought they might, and a large trade union mobilization in October likewise seemed less well attended than might be expected with divisions in syndical ranks.[20] This specific flashpoint, then, perhaps represents an eruption of personal dislike triggered by broad daily struggles and perceived assaults on ‘pouvoir d’achat’ parceled up in Macronisme. Like any big protest, it has attracted its compliment of rioters.[21] This in turn has muddied the tone of the movement, shifting focus beyond demands relating to ‘pouvoir d’achat’ to broader anarchic calls for generalized revolution, and violence against the forces of order towards unclear ends. Needless to say, when the assumptive heir of the Bourbon throne endorses your movement, things are in a very strange place indeed (and for once, perhaps, those pointing to Delacroix’s Liberty Leading the People might have cause to do so, with farcical echoes of a sort of reverse 1830).[22]

The violent intensification of protests changed the narrative, but was also accompanied by the broadening of the Lycée occupations, challenging (as ever) the “hierarchy and conservatism” of the state.[23] Across France, scenes of police dealing roughly with teenagers played badly, even where accusations of violence and vandalism were voiced. This is perhaps where narratives of 1968 become most relevant, as Lycéens said in May: Macron was commemorating ’68 whilst they relaunched it.[24] Yet in the range of causes, and the notional alliances being formed, there is perhaps a more vivid sense of the protests of 1995 which responded to Juppé’s proposed pension reforms, transport privatization, and a generalized climate of anger. Alan Touraine’s reflection on 1995 dubbed it “The Grand Refusal,” diagnosing a broad rejection of the structures of the French state and political elite, but without a coordinating social movement behind it. A swirling mix of clashing visions and alternatives were thrown together by the French state failing to react to the “external constraints” of globalization.[25] Borrowing from those early days of Poujadism, this movement is perhaps a “Grand Refusal” in the age of the “Commuter Democracy,” shorn of grand progressive dreams of the future, whilst remaining fiercely and collectively protective of their personal “pouvoir d’achat.” 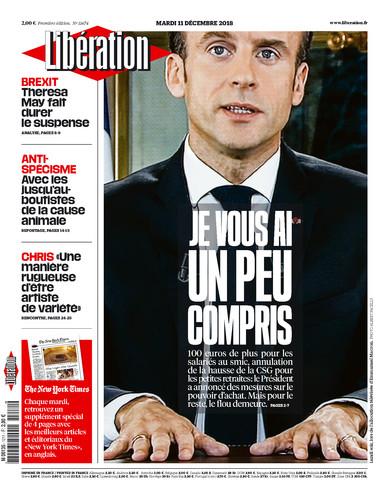 In response, the blandishments announced by Prime Minister Edouard Phillipe are, as one Gilet Jaune put it, peanuts.[26] In his address to the nation on 10th December, Macron went further, offering a €100 minimum wage increase in an expensive move already judged by some as too little, too late.[27] Alongside grand giveaways, advisors are counseling Jupiter to descend from Olympus to show that he understands the widespread complaints that even the polite Mouraud deemed “conneries.”[28] Yet, Macron will need to do more than promise “Je vous ai compris”, or as Libération joked on Tuesday morning, “Je vous ai un peu compris.”[29] Protests will continue as long as international (and supranational) commitments mean national reforms impact personal pouvoir d’achat. Like Poujade’s movement, the current protests don’t show “as much intellectual content as scream,”[30] and focus overtly on “negative mythology” around personal circumstance.[31] The profusion of historical references seek to borrow the progressive futures of the past, or to dismiss revolutionary cries of alarm as psychodramas (as Raymond Aron once did).[32] Between the two, in revolution and stagnation, lies the reality of the structural reconfigurations being wrought on the French social compact, and only time will tell how this Macroniste conflict contextualizes France’s history itself.

Andrew W.M. Smith is a Senior Lecturer in Contemporary History & Politics at the University of Chichester, and Secretary of the Society for the Study of French History. His first book Terror and terroir: the winegrowers of the Languedoc and modern France (Manchester University Press, 2016) explored changing modes of protest in Southern France in the latter half of the twentieth century. His work has engaged more broadly with regionalism, decolonization and identities beyond the frame of the nation-state.