In the summer of 1843, French feminist and activist Flora Tristan published a short book, L’Union ouvrière, or The Workers’ Union. Progressive French publishers panned the book. They cited its argument with sympathy, but they wondered who would read such a thing. Tristan paid for its publication herself by gathering subscriptions from poets, artisans, painters, laundresses, masons, and water carriers. Publishers soon learned they were wrong. The Workers’ Union was wildly successful. It went through several editions in just a few years, and workers themselves directly sponsored each reprinting. 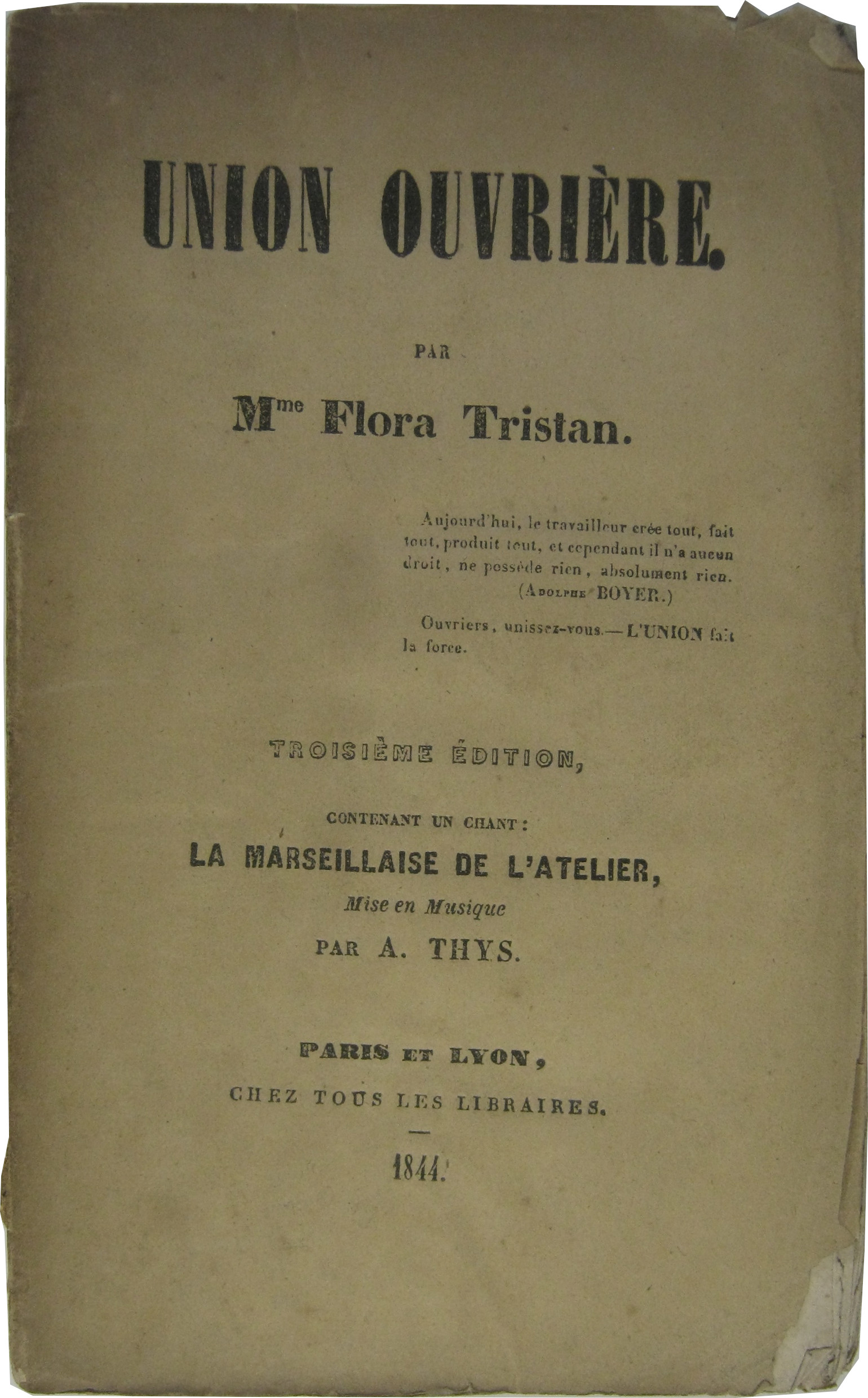 The arguments in this text were simple and bold: the conditions of both women and wage-workers resembled slavery. The time had come for workers of both sexes to form a common international union: “proceeding in the name of universal unity,” we must not “make any distinction between nationalities or male and female workers belonging to whichever nation on earth.”[1] By combining the fragments of power distributed among working men and women, they could acquire a power none could hold individually: international unity expressed through a “universal union of working men and women.”[2] With this power, it might be possible for workers to improve their social condition, perhaps even liberate themselves from centuries of economic dependency. In the most poignant component of the argument, Tristan imagined that workers could build their own “palaces” with their collective wealth. These palaces were effectively luxury retirement homes and community spaces. They were buildings where the working class could take classes and organize, but also enjoy the end of their life with dignity. When a worker died, they would be honored for their life of labor. It was unacceptable for a worker to leave this world as an anonymous accessory to capitalist production, as a piece of expired use-value.

With The Workers’ Union, Tristan entered the history of European political theory as its first labor internationalist.[3] Her arguments cut against the corporatist forms of organizational thinking that dominated political theory on the left. Most elite artisans, for example, continued to imagine the basic unit of association through the traditional workshop, the guild, and sometimes local churches. For their part, utopian socialists—that cluster of heterodox movements known for defending free love and industrial progress—typically proposed small, intentional communities. When some of them tried to imagine internationalism, like the Saint-Simonians, what they proposed was the forceful projection of modernization abroad, to North Africa and the Middle East, and embodied in industrial projects like the Suez Canal.[4]

Against these currents, Tristan’s book argued that corporatist thinking intensified internal divisions of the working class by segmenting them along lines of trade and geography. Hence the unprecedented claim of The Workers’ Union: rather than revive corporatism, men must abandon their local bodies and join women everywhere to create something historically new, a union of working men and women.

Tristan’s biographical experiences led her to see the cause of working men and women as intertwined. Born in 1803 to a French mother and Spanish father from Peru, she grew up outside of Paris in a home frequented by Simon Bolivar. Her father and the young Bolivar had been close friends and confidants. When she was 17 years old, she married an abusive engraver named André Chazal. She failed repeatedly to divorce him and fought to retain custody of her children. In 1833, she set sail to Peru to secure an inheritance from her uncle. She failed in her efforts, but the trip radicalized her on the plight of women across the globe. She saw similarities between her efforts to flee her husband at home and the condition of her female relatives abroad. “In Europe,” she complained to her cousin, “women are men’s slaves just as they are here.”[5] Indeed, when she returned to France, her husband shot her, but she survived the bullet and won infamy (and her divorce). By the late 1830s, she was involved with utopian socialism and collaborated with leading progressive intellectuals like Charles Fourier, Victor Considerant, Robert Owen, and George Sand.

Her life, in other words, was one extended pursuit of independence: from her husband, from poverty, from conventional ideas about womanhood and social organization. That lifelong pursuit of independence is what allowed her to break so much philosophical ground. She broke ground for socialist thought, because she operated with an enormously capacious understanding of what counted as work and the working class: “By working man or woman, we mean any individual who works with his or her hands in any fashion. Thus, servants, porters, messengers, laborers, and all the so-called odd-jobbers will be considered workers.”[6] This definition went beyond more limited understandings of “the working class” that included only those who sold their labor-power for a wage, those who labor was “skilled,” or male workers. She also broke ground for feminism, because she was able to show that the working class as a whole was disempowered by the patriarchal division of labor. That division of labor separated men and women into distinct spheres, like “the home” and “the workplace.” As a result, the division of labor not only justified women’s subordination to men within the family. It also divided the working class against itself, robbing the latter of their collective power. Hence Tristan’s prescriptions for a sequence of local unions that collectively formed a superior unified body rather than a confederation of distinct bodies. Unity was key, because it expressed the fact that all workers—working men and women alike—shared a common interest and linked fate. Neither could win their independence without the other.

To be sure, Tristan was not alone in crafting new images of internationalism in the climate of utopian socialism. She belonged to a diverse landscape of radical socialist women (“femmes prolétaires”) who struggled within its progressive currents to radicalize its feminist possibilities. That landscape included women like Claire Bazard, the first woman member of the Saint-Simonian “Tribune”; Désirée Véret, a follower of Enfantin, Fourier, and Owen who would go on to help establish the First International; Suzanne Volquin, who with Véret and Marie-Reine Guindorf helped found La Femme libre, the first proletarian feminist magazine in France; Jeanne Deroin, among the first activists to propose a federation of unions; and Clair Demar, a powerful internal critic of Saint-Simonism and defender of free love. These feminist women took seriously—more seriously than many of their male counterparts— Fourier’s proposition that “Social progress and changes of historical period are brought about as a result of the progress of women towards liberty,” because “the extension of the privileges of women is the basic principle of all social progress.”[7]

Yet Tristan stands out as the outstanding internationalist of her generation, because in ways more forthright than anyone else, she made internationalism the crucial ingredient to the resolution of the social question. Like subsequent socialists, she insisted that questions of servitude and liberty, dependence and autonomy, were best worked through at the international level. She understood that, when it comes to liberation, we have to scale up to the globe rather than scale down to the commune or phalanstery. Her writings therefore offer a feminist origin for subsequent forms of internationalism. They anticipate Marx’s International Workingmen’s Association, and there is speculation among her biographers that Marx may have heard her lecture in Paris in the early 1840s.[8] They also point to a surprising genealogy for feminist-socialist thinking: rather than an outgrowth of internal disputes within “scientific” socialism, it had its roots in socialism’s decidedly unscientific “utopian” phase.

Competing dreams of internationalism shape the history of political thought after Tristan. Some, like those of twentieth century liberal internationalism, will take shape through institutions like the United Nations or the World Trade Organization. They will be dreams of equilibrium and order, of humanitarian intervention and the balancing of great powers, and of the free flow of capital. Others will be dreams of emancipation and global solidarity, of universal liberation from oppression. Pan-Africanists in the twentieth century will dream of a world of self-determining peoples and a New International Economic Order—one built on the redistribution of stolen wealth from empires to newly liberated colonies.[9]

Tristan, however, reminds us that the Age of Revolutions produced its own dreams of internationalism. Her life invites us to inhabit a moment in the history of the left when the trajectories of socialism, feminism, and republicanism were not yet pried apart. She believed, as a matter of common sense, that socialism and feminism shared a joint pursuit of political freedom as collective independence. In so doing, she articulated a horizon that we, almost two centuries later, are still fighting to protect: an international movement of working women and men.

Kevin Duong is an Assistant Professor of Political Studies at Bard College, where he teaches political theory and modern intellectual history. His book, Democracy and the Virtues of Violence, is under contract with Oxford University Press. He is also writing a book, What Universal Suffrage Was, that reconstructs revolutionary conceptions of “the voice of the people” forged during struggles for universal suffrage in France, its Empire, and America. He can be reached at kevin.t.duong@gmail.com.