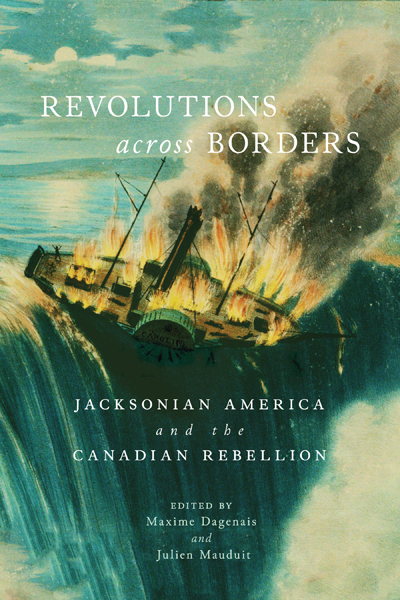 A few weeks ago, a book that my good friend Julien Mauduit and I have been working on for years, Revolutions Across Borders: Jacksonian America and the Canadian Rebellion, was published with McGill-Queen’s University Press (MQUP). We hope that this book will not only push historians in Canada to reflect on the transnational nature of this Canadian event, but more importantly, we hope to show American historians that Canadian history – in an American historical context – matters. For instance, when considering “borderlands during the Jacksonian Era,” historians of the United States have a tendency to focus on the western and southern borderlands, particularly Texas/Mexico. However, a focus on Canada can help reveal some of the many and oftentimes contradictory ways the American government dealt with each border and borderland.

The Canadian Rebellion – this armed insurrection that opposed reformers in Upper and Lower Canada against a conservative elite that was unwilling to share political authority – is, without a doubt, one of the most studied events in Canadian history. Indeed, to Canadian scholars, especially in Québec, studying the Rebellion is nothing new. For instance, in 2015-16, when we first started working on this edited volume, three monographs on the topic – Gilles Laporte’s Brève histoire des patriotes, François Deschamps’ La “rebellion de 1837” à travers du prisme du Montreal Herald, and Mylène Bédard’s Écrire en temps d’insurrections – were published. In Quebec, the Rebellion has become a major part of our collective identity; one that is celebrated every May with La Journée nationale des patriotes. However, these studies have one thing in common: they consider the event from a local and national perspective. They deal exclusively with the Rebellion’s importance in Canada. The Rebellion’s impact beyond Canada remains elusive.

It makes perfect sense to examine the Rebellion in an American context. Shortly after Lower Canadian rebels were defeated at Saint-Charles and Saint-Eustache and Upper Canadians rebels were forced to evacuate Navy Island (on the Niagara River), where they proclaimed the Republic of Upper Canada, many rebels and rebel leaders sought refuge in the United States. They sent letters to local leaders and travelled to Boston, New York City, Philadelphia, and Washington seeking financial and/or military support. Though the American Government, under the leadership of Martin Van Buren, adopted a policy of neutrality, Americans all over the borderland supported the rebels in their quest to free Canada from the oppression of “British Thraldom.” Many even linked events in Canada with those in the United States in 1776, comparing the likes of Louis Joseph Papineau and William Lyon Mackenzie to Georges Washington and Thomas Jefferson. And this support went beyond the borderland. I have argued elsewhere (American Review of Canadian Studies) that rebels counted on significant support in Philadelphia. Many were unable or unwilling to offer military and financial support to the rebels, but many hoped that the rebels succeeded and offered moral support. Actual military and financial support were most obvious along the border. All along the border states, Americans joined secret societies known as the Hunters’ Lodges and assisted the rebels in their fight against the British. In fact, support was so significant that Martin Van Buren had to send General Winfield Scott to the border to arrest any American causing a disturbance there.

When one considers American history during this period, it is easy to understand why the Rebellion has not garnered the attention of many American history. The United States, at the time, were going through a very turbulent and divisive period of their history: it was in the midst of the Jacksonian democracy; the Panic of 1837; Texas’s secession from Mexico; and abolitionist debates. On first impression, these are all events that appear to have a more important impact on the United States than a failed rebellion in the Canadas. However, we argue that the Rebellion mattered even more in the United States due to this volatile context. In this intense period of division, the Canadian Rebellion added to the divisiveness and pressures felt by the republic.

Our edited volume builds on the work of previous historians. In fact, some very important foundations have been laid since historians like Orrin Tiffany, Edwin C. Guillet, Albert Corey, and Oscar A. Kinchen have first considered the Canadian Rebellion in an American context, focusing especially on the Hunter’s Lodges. Lillian F. Gates, Marc L. Harris, and Yvan Lamonde, for instance, have pushed our understanding of the Rebellion by considering its links with the Market Revolution and the radical democrats. More recently, historians like Andrew Bonthius, David Shields, Louis-Georges Harvey, Julien Mauduit, Stephen Smith, myself, and every other contributor in our volume have considered links with slavery, abolitionism, Manifest Destiny, Texas, the Bank War, and republicanism. We are, therefore, not the very first to make explicit links between the Canadian Rebellion and Jacksonian America. Saying otherwise would minimize the important work done by previous generations of historians; however, this collection provides the most in-depth and complete analysis connecting the Canadian Rebellion – and Canada in general – to Jacksonian America to date.

With an afterword by Amy Greenberg, each author demonstrates just how important this Rebellion was on the United States. Our chapters consider its impact on American foreign policy and economy, Manifest Destiny, and politics. Three chapters, written by Julien Mauduit, Thomas Richards Jr., and Andrew Bonthius, show how the Rebellion shook the fragile bonds that many Americans had with their country, forcing many to consider their loyalty to the young republic and even pushing others to seek a “better” alternative. Each suggests that the Rebellion emphasised the many divisions in the United States. Many Americans had grown frustrated with their country and felt alienated by it and believed that obtaining political and financial power had become an unattainable goal. To many, the United States only favoured a specific class and that the ideals of “true democracy” had been neglected. The Rebellion provided these disillusioned Americans with the opportunity to act out. And some used this context to seek out or push forward social, economic, and political alternatives.

In Ohio, for instance, Dr. Samuel Underhill and his supporters used the rebellion and surrounding events to push a socioeconomic alternative to a United States they felt was dominated by a ruthless monied aristocracy. Instead, they sought to reform it into a nation led by yeoman-farmers producers. Others hoped to create an alternative republic outside of the United States. All over the borderland, Americans supported the Rebellion in the hopes of creating a place where they could achieve their social, political and economic goals. They believed that the Rebellion offered the perfect opportunity to start over and create an alternative, based on true ideals of democracy, in Upper Canada. And all over the borderland, thousands of Americans reconsidered their loyalty to the Democratic Party, seeking an alternative with the Whig Party. Martin Van Buren’s domestic and foreign policies, specifically his outright opposition to the Canadian Rebellion, turned many against him. This stance undermined his popularity with radical democrats in the northeast and destroyed the delicate balance that he had secured between the slave-owning south and the more populist elements of the north.

These chapters, and our book more generally, not only suggest that the Canadian Rebellion had a significant impact on early America, but they provide a new window through which historians of early America can examine the major social, political, and economic changes that were taking place in the United States during the period, including conflicts surrounding Jacksonian democracy, the Market Revolution, the Locofoco movement, American expansionism, Manifest Destiny, and slavery. With our book now out, we not only hope to show American historians that the Canadian Rebellion mattered, but more generally that the other border – the one with Canada – mattered as much as the western and southern borders, further restoring Canada’s place in American history.[1]

Maxime Dagenais is an adjunct assistant professor at McMaster University and the coordinator of the Wilson Institute for Canadian History. He holds a PhD from the University of Ottawa and postdoctoral fellowships from the Wilson Institute and the McNeil Center for Early American Studies. He is the author of The Land in Between: The Upper Saint John Valley: Prehistory to World War One, Revolutions Across Borders: Jacksonian America and the Canadian Rebellion and numerous academic articles, including in Quebec Studies, Bulletin d’histoire politique, Canadian Military History, and American Review of Canadian Studies.

Title image: The destruction of the Caroline steamboat by fire, on the Falls of Niagara, Upper Canada, on the night of Friday the 29th Decr. 1837 by George Tattersall. Wikimedia Commons.

[1] Shout out to our upcoming 2020 OAH Panel – The Other Border: Canada’s Place in U.S. History, from the Revolution to Reconstruction – where he hope to expand on these conversations.