More and more academics have turned to digital humanities to interrogate early modern history, which has led to an influx of 3D modeling projects of early urban spaces. Serena Zabin’s video game, Witness to the Revolution, is one great example. Set in 1770 Boston right after the Boston Massacre, the game investigates many historical questions that have stemmed from Zabin’s recent book, The Boston Massacre: A Family History. It has also served as a teaching and learning tool in her classes at Carleton College. As another academic trying to recreate colonial urban space using 3D modeling, I thought it would be insightful and inspiring to see how others have approached the task of visualizing the past. Here is the interview:

Molly Nebiolo (MN): Can you briefly describe your video game and the story behind the title?

Serena Zabin (SZ): The game is a mission in which the player walks around a digitally reconstructed eighteenth-century Boston in order to collect depositions from people who claim that they know something about a shooting (which will come to be known as the Boston Massacre). The game both gives the player a chance to explore the city and to assess evidence, and think like a historian. 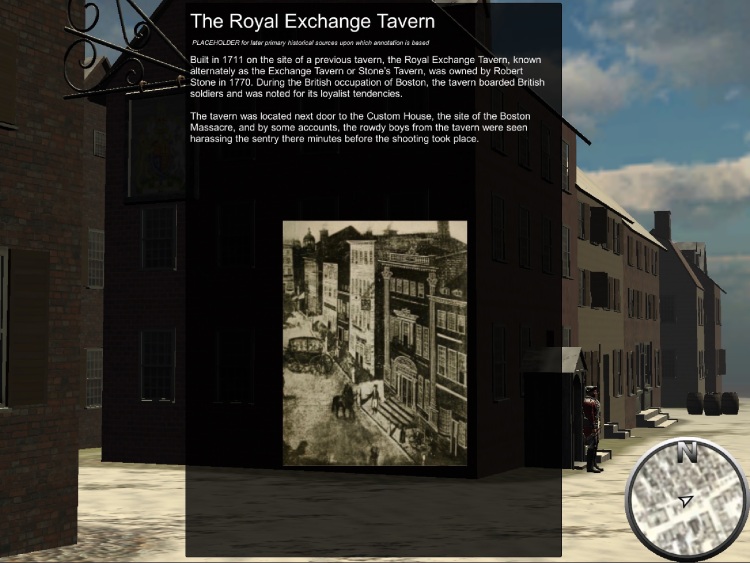 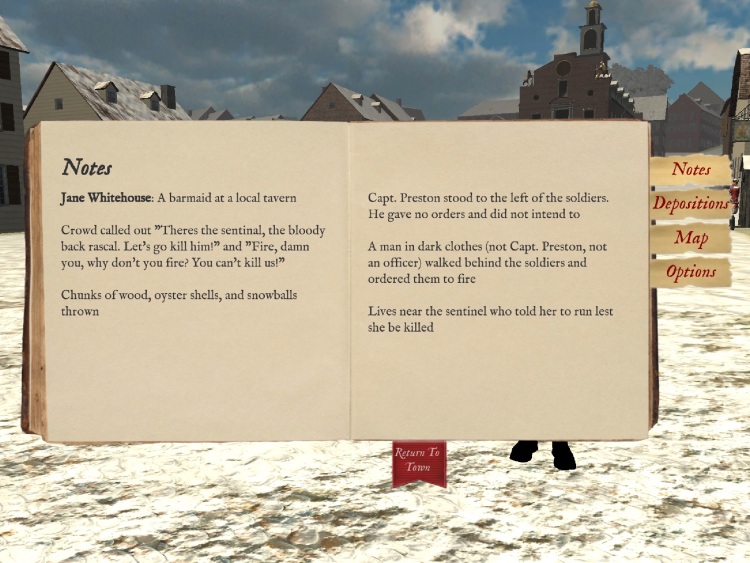 On the day after British soldiers shot civilians in the center of Boston, the Boston Town Meeting appointed a committee to take depositions from those who had witnessed the shooting, or the behavior of soldiers before the violence began. Members of the committee sought out both men and women and asked them for their recollections. Witness to the Revolution asks its players to join this committee and interview witnesses to try to make sense of the shooting. Rather than seeking an unrecoverable historical truth, however, this quest game demands that the player sort through the confusing evidence and assess the varied value of historical and eyewitness evidence.

MN: This work is tied directly to your new book, The Boston Massacre. Can you discuss the connections there?

SZ: My own research started with the depositions that are at the heart of the game. Those depositions were published by the Town of Boston in a pamphlet called A Short Narrative of the Horrid Massacre in Boston; historians have often used them to try to reconstruct the events of the night. When I read them, though, the first thing that struck me was how much about ordinary eighteenth-century life was simply embedded in each deposition—where people walked, how they spent their time, with whom they shared a drink. What better set of sources for putting people into a digitally reconstructed city?

MN: What were the big research questions that started off this project?

SZ: After I came across scores of baptisms in which civilians stood as godparents for soldiers’ children, I wondered if proximity could explain why military families had asked certain Bostonians to be godparents. Did they just ask their next-door neighbors or landlords? So I started trying to map where soldiers and civilians lived. It turns out that I really didn’t have the right data to answer that question, but the process led me to create an extremely detailed map of Boston.

MN: Which platforms did you use for this project, and why did you choose a video game as the result? Did that idea change since you first started?

SZ: I started mapping on a desktop version of ArcGIS. As I continued to work on the mapping—first locating homes and then the routes that witnesses said they took to see the Massacre—students became increasingly excited about the idea of seeing Boston through the eyes of witnesses, rather than as a birds-eye view. My three undergraduate research assistants and I began to play around with the 3D model program called “CityEngine” and reconstructed a few buildings. But the program was quite complex and honestly required more math than I remembered from college. It was clear that we needed an expert. Once my colleague in DH, Austin Mason, came on board and showed us how quickly we could start zipping around a 3D city, my students immediately began to imagine competitions and other games. While I never would have thought of creating a computer game, the idea came to my students in a flash.

MN: Did you have any experience with 3D modeling, digital humanities, or digital history beforehand?

SZ: Absolutely none. I had created a relational database a few years earlier and I was pretty proud of myself. I would never have imagined that I would even crack open the door to the world of DH.

MN: What are some of the big challenges you faced while completing this project? What were some of the surprising obstacles you had to face to make the video game happen?

SZ: I was pleasantly surprised at how well our undergraduates were able to create the game mechanics—having the player be able to approach witnesses, for example—but I had no idea how hard it would be to create the art that makes a video game actually worth looking at. And when we tried to purchase “off the shelf” figures on which to base our characters, we found that almost all women made for computer games were either superheroes or medieval serving women: either way, they were very scantily dressed. That was definitely not the look we were going for!

MN: Who is your ideal audience for this and did that affect the scope and construction of this project?

SZ: The game is intended for secondary school and college students, and for anyone who enjoys historical mysteries. Honestly, the scope is limited mostly by my time and expertise; my students have enormous imaginations!

MN: What kinds of historical sources did you use to visually recreate eighteenth-century Boston?

SZ: There are some written descriptions from the time, as well as a few memoirs. British officers painted a number of watercolors during the Siege of Boston that are very useful. There are extensive descriptions of the damage done by the 1760 fire in Boston.  Obviously, Paul Revere’s engraving helps, as do several other contemporary images, including a watercolor image of Boston Commons. The selectmen’s records sometimes specify the size of a plot or the width of a street or wharf. And of course, the 1769 map itself is essential.

But there are some challenges to translating those sources to a visual reconstruction. The appearance of this game (or any 3d reconstruction) is made on the basis of many decisions about how to incorporate the various details of those sources into a coherent whole (just as it is for a piece of scholarship). But when players immerse themselves in our virtual world they think they are experiencing the visual truth—it’s not easy to help them keep in mind that what they’re seeing is just as much the product of the historian’s method as anything they might read in a book.

MN: Is this a completed project, or one you hope to build upon over time? How long did it take to get to this product?

SZ: I expect the project has a few more years before the final version is released.

I started working with ArcGIS in 2012, so it’s been eight years already. The project has not been continuous; I have worked on it in fits and starts with successive groups of students. The rest of the town beyond King Street is only lightly sketched out. The interiors of buildings still need more detail, and the streets themselves are somewhat empty: few people, and no mounting blocks or heaps of garbage. The major element that remains to be created involves setting up the ‘quest’ element of the game—how a conversation with one townsperson might shape the course of the player’s journey to the next conversation.

MN: What do you think this project adds to the field of early American history?

SZ: It’s an engaging way to bring the past to life. The aim is to create a world shaped by a great deal of research and a game that wears its learning lightly but that also allows its players to read the footnotes, so to speak, and to learn how it is that we know what we know. It empowers the player to be a historian, to create an account of the past that is based on the player’s experiences and analysis.

MN: What has been your favorite part of the project?

SZ: Sharing the game with others. I’ve hosted several playtesting sessions with students and with the public, and it’s been great fun to see people dive into the world and create their own stories (as well as telling me what more needs to be done).

MN: What is your advice to someone hoping to use digital humanities interfaces and tools to pair with their historical research? And for using 3D modeling/ gaming as their tool of choice?

SZ: Be prepared for it to go slowly. These projects are nearly always collaborative, which brings its own rewards and obstacles, and anyone in charge of a DH project will need some combination of time, student help, and financial support.

While Zabin’s project has taken years of work with the support of students and other faculty, recreating aspects of early American cities, or other digital projects, are still possible on a smaller scale. For my own project, I am in the process of recreating one or two streets of colonial Philadelphia using the programs Sketchup Pro and Unity. The process has been challenging, but it has led me to be more aware of early colonial architecture, the importance of space in urban history, and most importantly, the abundance of support resources available online, like tutorials, videos, or forums. Additionally, DH is a field that is built on collaboration, and looking to other projects parallel to your own interests can jumpstart your project. In particular, Zabin’s project has shown me an aspect of 3D modeling I hadn’t considered with my own work, that of video game making, and the game itself has shown me what recreating a revolutionary city actually looks like, instead of basing my project on what I imagined it to be like.

If you are interested in 3D modeling, but don’t know where to begin, check out this blog post, where I discuss where to get started and how to familiarize yourself with the digital tools. For more information about Zabin’s video game, please visit the Witness to the Revolution blog.

Serena Zabin is a professor of early America and Director of the American Studies Program at Carleton College. Her most recent book, The Boston Massacre: A Family History, was published February 2020 by Houghton Mifflin Court. This work sheds light on the personal conflicts that were entangled with the political issues that led to the Boston Massacre, creating an intimate people’s history of this revolutionary period. Her other works include Dangerous Economies: Status and Commerce in Imperial New York and The New York Conspiracy Trials of 1741: Daniel Horsmanden’s Journal of the Proceedings.